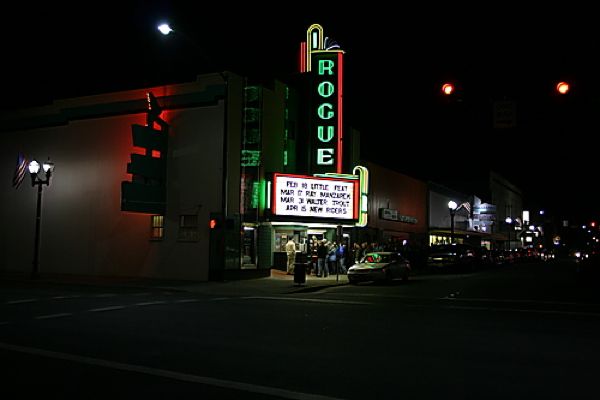 The Rogue Theatre opened its doors in 1938 as one of the few theaters built during the heart of the Great Depression. Crowds filled her seats to watch Spencer Tracy, Clark Gable, and Marlene Dietrich on the silver screen. News Reels brought home the battlefront during the “Big War.” Through the fabulous 50’s, and the turbulent 60’s the theatre attracted crowds to downtown Grants Pass. As years passed, the advent of television, multiplex cinemas and shopping malls made it difficult for the aging theatre to compete. Closing it’s doors in 1999.

In 2000, the Rogue Theatre was reopened as a regional non-profit performing arts center. Complete with state-of-the-art sound and lighting. The Rogue is now capable of hosting a wide range of arts and cultural events, including theater, concerts, dance and film presentations.

The Rogue Theatre is one of Grants Pass’ most prominent historical buildings. The Art Deco exterior and glowing neon marquee add to the warmth and charm of the city’s historical district. It has been recognized as both an important statewide and national historic resource. The ongoing restoration the theatre with the generosity of The Carpenter Foundation and the Myers Trust, as well as local patrons, has preserved one of the city’s few remaining landmark buildings.

I would like to claim this listing. This is my business or I am authorized on behalf of this business to claim and manage this listing. Website admin review and approval will be required.